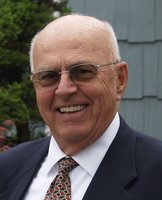 John was born on October 26, 1941 in Elizabeth, NJ to the late John Dec and Jean (Boron) Dec.  He grew up in Winfield Park, NJ, oldest of three brothers (Richard and Edward).  He attended Seton Hall Prep, graduating in 1959.  He then went on to attend Stevens Institute of Technology, graduating with a Bachelor of Engineering Degree in 1963.  He met Ann Theresa Gerrity of Colonia, NJ, who would later become his wife, shortly after graduation.  While dating Ann, he attended University of Pennsylvania at the Wharton School of Business, graduating in 1965 with a Master of Business Administration degree. John and Ann married on October, 29, 1966.

John was very proud of his career which took him from NJ to Virginia to Upstate NY to Texas and back to NY, working for DuPont, Singer Aviation, General Public Utility, Frito Lay and Pepsi Co.  He retired at age 59 after working 30 years at PepsiCo.

However, his career, to John, was a means to an end. His goal was to provide a great life and loving household to his wife Ann and his two children John and Kelly.  Living in Montvale, NJ, John was always actively involved with his family between work trips.  His most enjoyable times were coaching baseball, softball, and basketball for both John and Kelly’s teams.  As well as the many family vacations to the NJ Shore, Florida, Cape Cod, California, Virginia and especially Hawaii.  Hawaii became his favorite place in the world.  He was able to take his family there annually for over 40 years, continuing after his retirement and included his grandchildren.

After retiring he had time to enjoy his growing family, spend quality time with Ann and enjoy the golf course three (or more) times a week.  This time also included a couple bucket list items such as living on the water and owning a boat, but especially teaching at a university level when he spent a few semesters at Monmouth University teaching Operations Management. However, what he most enjoyed was his grandchildren.  Spending time with them as they took their first steps, watching them grow, and especially watching them play baseball, softball, football, basketball, golf and wrestling. Witnessing them make their First Holy Communions, graduating elementary school and high school and quite a few piano, ballet, chorus, dance, and gymnastics recitals. His time as Pop-pop was his happiest time in life.

John is predeceased by his parents, John Dec and Jean (Boron) Dec and by his nephew, Kevin Reinhard.

John is survived by his wife of 54 years, Ann (Gerrity) Dec, his son John Dec and wife Monica, his daughter Kelly Flamio and husband Frank; his grandchildren Emily, John, Madeline Dec and Joseph and Allison Flamio. He is also survived by his brother Richard Dec and wife Carol, brother Edward Dec and wife Christine. His brothers-in-law, Jack Gerrity and Michael Gerrity, sisters-in-law Kathleen Reinhard and her husband James, and Marybeth Gerrity. As well as many nieces and nephews, grand nieces and grand nephews.

In lieu of flowers, donations can be made to Our Lady of Lourdes Church.