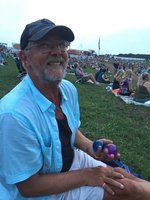 Born in Chatham, New Jersey, he was the son of the late Kenneth and Janet Boettger.

Tom lived in Chatham and Branchburg before moving to Readington Township eight years ago.

He was a talented Computer Programmer working most recently for Mercedes Benz in Montvale, NJ.

Tom was a gifted musician, playing several instruments including the drums, piano, and guitar.   He had a passion for music and was able to share his gifts as a drummer in a Steely Dan tribute band called the Royal Scam.  Tom loved the outdoors and any chance he was able to get away on a camping trip.

Tom was predeceased by his brother, David.

He is survived by his long-time girlfriend, Jeanne McCalley; his two sons, Jason and Brian Boettger of North Carolina; his daughter, Jessica Boettger of Texas; his brother, Barry and his wife, Kathy of MA; his nephew, Kevin and two nieces, Hailey and Julia.  He also leaves behind his beloved companion and dog, Sunny and his cat, Sandy.