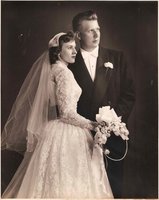 Born on June 13, 1930 in Garfield, New Jersey, he was the son of the late Louis and Theresa Zylstra.

At a young age, Robert moved with his family to Whitehouse Station where they farmed the land at the Ryland Inn.  In May of 1953 he married the love of his life, Joan and started a family of their own. He took a job as a production supervisor for P. Ballantine and Sons Brewing Company in Newark until an opportunity arose to manage the Howard Johnson Restaurant on Rt. 22 in Somerville.  In 1982 he bought the Marroe Inn in Lawrenceville, which he owned and operated until his retirement in 2007.

Dedicated to his community, Robert served as a volunteer for over ten years on both the Whitehouse Rescue Squad and Whitehouse Fire Department.

He was predeceased by his wife of 67 years, Joan (Bush) Zylstra this past January; his daughter, Janet Eick of Howard, PA in 2007; his sister, Albina Cwik of Vero Beach, FL; and his sister, Carol Benakis of Somers Point, NJ.

Robert is survived by his two children, Robert L. Zylstra of Union Township and Linda Seymour of Jutland; his two grandchildren, Stephanie (Seymour) Burgess of Holland Township and Kevin Seymour of Pennington, NJ; his great granddaughter, Olivia Burgess, as well as, his sister Sharon Cooper of Belvidere, NJ.

A graveside service will be held on Saturday, March 6, 2021 at 1:15 PM at the Rural Hill Cemetery in Whitehouse, NJ.

In lieu of flowers donations may be made to the Parkinson's Charity of your choice or to the Readington Reformed Church, PO Box 1, 124 Readington Road, Readington, NJ 08870.  Please note "In memory of Robert Zylstra".

For more information or to send condolences please visit www.kearnsfuneralhome.com.