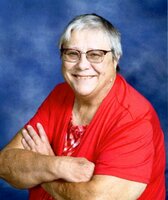 Born in Doran, Minnesota, she was the daughter of the late Irving and  Esme Springer. She grew up on her family’s farm and had wonderful memories of her childhood.

Karen met and started dating her future husband, Donald in high school.  They were two of the three co-valedictorians of their senior class.  Both went on to attend and graduate from the University of Minnesota.  During their fourth year in college they decided to get married during Christmas break in 1964.  Karen graduated with a Bachelor of Chemistry and a Master of Education in Secondary Education.  She then taught school chemistry at a nearby high school.

Upon Don’s completion of his D.V.M. Degree they moved to Worthington, Ohio so he could attend Ohio State University to obtain his PhD.  Karen started school at Ohio State University also, working toward an advanced degree in inorganic chemistry.  While she enjoyed most of her classes, she decided it was time to stay home, and perhaps start a family.  Both her daughters, Beth and Tara were born in Ohio.   Don’s completion of his PhD had the family moving to near Albany, NY and the birth of Douglas would complete their family. While the children were growing up many camping trips and adventures were had.  The family attended Voorheesville United Methodist Church and it was there Karen met the Pastor, Dick and his wife, Mary Beth whom she considered her best friends.

In 1983 the family moved to Readington Twp. NJ.  Karen had become very involved in her last church. That prompted her to attend Drew Theological Seminary to learn how to be better at teaching in church.  She took a job at the North Branch Reformed Church as their director of religious education.   Halfway through seminary she decided to seek ordination rather than continue the plan of Christian education.  All this of course was done with the advice and blessing of Pastor Dick.  In 1989 she was ordained a full Elder in the Church.  Her first full-time appointment was at Green Village in 1988.  She then served as Pastor at the Rutherford United Methodist Church, before being appointed with a 2-point charge of Port Morris U.M.C. and Teabo U.M.C.  In 2003, Karen was assigned just to the Teabo U.M.C. and it was there she would retire in 2007.  Karen touched a lot of lives and made a difference.  After retirement she and Don continued camping and visiting with friends and family all throughout the United States.

She was predeceased by her brothers, Maurice and David Springer and her sister, Ellen Mills.

A memorial service will be held on Saturday, September 3, 2022 at the Whitehouse United Methodist Church at 1 PM.

In lieu of flowers, the family has requested donations, in Karen’s name may be made to the United Methodist Committee on Relief at: Global Ministries/UMCOR, GPO, P.O. Box 9068, New York, NY 10087-9068 or to Karen's beloved Church at: Whitehouse United Methodist Church, PO Box 190, Whitehouse, NJ 08888.