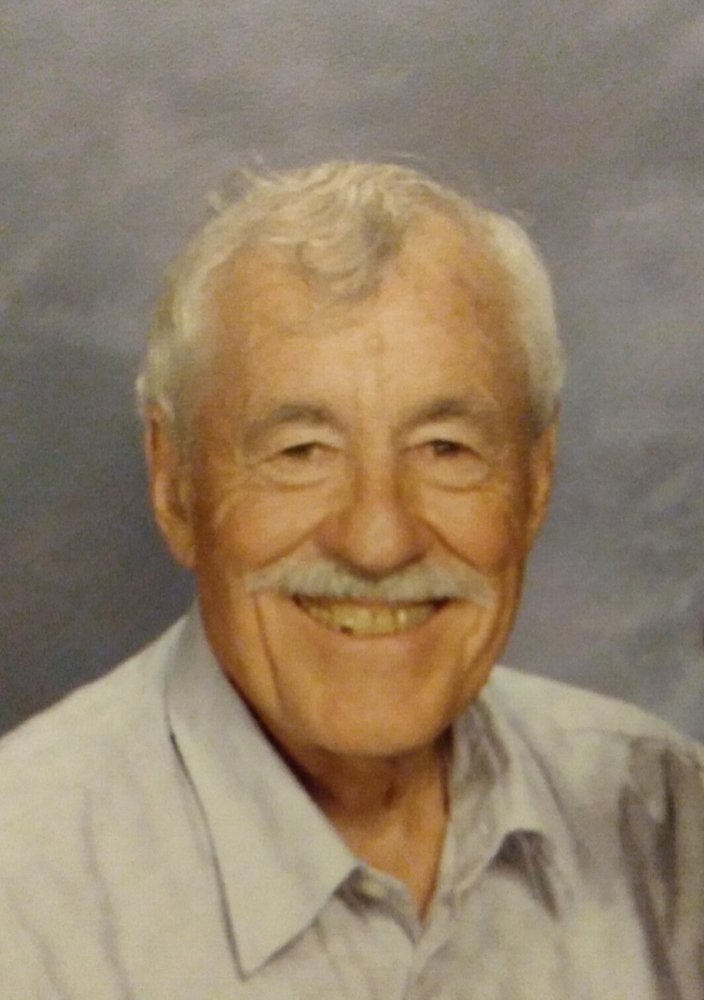 Ted was born on April 24, 1932 on the family farm near Richardsville, Iowa to John and Clara (Merkes) Klein. He was the youngest of seven children. They were German-American heritage, the same as the rest of the Richardsville farming community, whose families had come to America several generations before.

His mother, a sweet and kind lady, went into labor several weeks prematurely, during the spring thaw which is the muddy season in that part of Iowa. Living a mile from the main highway on a dirt road, made traveling a challenge. His father set out with wagon and horses to help bring Dr. Bries (everyone’s family doctor) from Holy Cross through the almost impassable roads. In the meantime (with the help of a neighbor lady), a tiny 4.5 lb baby boy was born.  When Doc Bries arrived, he advised them to keep the baby swaddled in warm clothes, nestled in a shoe box by the wood burning stove, as this was cold, damp weather in a house with no electricity or central heating. He most likely did not believe this tiny baby would survive. No birth certificate was filed. This was discovered 40 years later, when applying for a passport, and a document known as a Delayed Birth Certificate was issued.  The tiny baby boy was baptized Theodore Julius, perhaps after Theodore Roosevelt and the baby’s godfather, Uncle Julius.

Teddy, as he was called, grew up on the family farm – learning much from his four brothers and two sisters. He was very anxious to go to school. By the time he started first grade at St. Joseph’s School in Richardsville, he already knew much of the work, having learned from his older siblings.

Ted seemed to be a normal, healthy child, and grew up on the farm, playing and working with his siblings. In 8th grade when he came down with a kidney disease, possibly attributed to complications of scarlet fever, he spent most of the year in bed at home with his faithful dog at his side, doing his assigned lessons sent home with his older sisters, who helped tutor him. He passed his exams and was able to attend graduation with his class.

He went to 9th grade in Richardsville, which was the highest grade that was offered, and then on to Holy Cross High School. A good and serious student, he graduated at the top of his class of 11 students and was president of his senior class. His dream was to go to college,  however his parents could not afford to send him, so he helped his older brother Eldon on the family farm. Then he started working for his other brother, John, who had a construction company. He built houses and barns, and made all sorts of improvements and repairs including carpentry, masonry, plumbing, and electricity. (He kept these skills and enjoyed using them throughout his life). He loved the work, but he still dreamed of going to college and becoming an electrical engineer.

In the meantime, he saw all his friends and brothers join the military.  When his draft number came up, he was anxious to join them, however due to his history with kidney disease he was not accepted.

His big break came when his brother Al came back from the Air Force and announced he was planning to go to Iowa State on the GI bill. Al was married and had one child and one on the way. He knew how badly Ted wanted to go to college, and that his funds were limited. (In those days it was the custom in some families for children to turn over their wages to their parents until they were 21. Ted honored this and did not have the opportunity to save for his own future.) Al and his wife generously offered that he could come to Iowa State and share their small married housing apartment, sharing a room with their baby. Ted jumped at the chance and in Jan 1955 (just weeks after becoming engaged to be married, to his high school sweetheart, Norma), he began the Electrical Engineering program at Iowa State. Classes were difficult, having been out of school for almost 5 years and competing with returning GIs who had gotten electronic training during military service. But he studied hard and also worked every available job to earn money (from setting bowling pins to digging ditches and finally landing some carpentry jobs that paid better).

In June of 1956, after having completed 2 years of college (by taking summer courses), Ted and Norma were married. Fifteen months later, their oldest daughter, Kim was born.  In 1958, Ted and his brother Al both graduated with their hard-earned engineering degrees.

1958 was a year of recession, and the only job offered was at Fort Monmouth, NJ … based on an interview at the college. No trip to see the worksite and no moving assistance was offered, but a promise of paying for a Master’s Degree was part of the deal so it looked really good. Ted and Norma packed up their baby and all their belongings into their car and drove to the East Coast. They had never been out of the mid-west, much less seen the ocean. They settled into an apartment in Long Branch, NJ. What an adventure.

Fort Monmouth turned out to be a good move. As promised, they supported him through his MS in Electrical Engineering from Rutgers in 1962 and then on through his PhD studies at Brooklyn Poly. He earned his PhD in Systems Engineering in 1970.  By this time, Ted and Norma had added Joseph, Suzanne and John to their family and all were present at his graduation.  During this time Ted and Norma bought a house in Atlantic Highlands, where he was an active volunteer for St. Agnes Church and PTA, as well as the Boy Scouts.  Woodworking was also a favorite hobby and he built beautiful cabinets and furniture for his homes.

He continued to work at Fort Monmouth, doing research in Army Radio Communications on the cutting edge of communications technology. He holds four US patents and was part of the early days of the ARPANET and packet radio technology which were the precursors to the internet we all know today.  He mentored young scientists by teaching at Monmouth College and working with them through the Junior Science Symposium.

During these years, Ted cherished family time the most and every summer took his family back to Iowa, and camped all over the east coast and mid-west. One of the family adventures was a 5-week camping/road trip to the American and Canadian Rocky mountains. He loved the educational opportunities for his family to learn first-hand about the land, wildlife, history and community life wherever they traveled.

After 30 years, Ted retired from Fort Monmouth and embarked upon a 10-week camping adventure with Norma that took them around the country.   Upon returning he continued to work in the military-support industry with several private companies on leading edge communications projects.

In 2000, Ted and Norma decided to re-locate from beautiful Monmouth County to beautiful Hunterdon County to be near their children and grandchildren. Ted was always ready to lend a helping hand with construction projects at his children’s homes, and enjoyed his own home improvements, yard work, and of course his computer.  Ted and Norma continued to enjoy traveling together, both in foreign lands and in the US and Canada, including driving all the way to the Arctic Ocean!  No matter where they traveled, Ted always stayed abreast of current events and political situations and enjoyed healthy discussions with his children and grandchildren on these topics. He also enjoyed going to the many sporting and musical events of his grandchildren and always greatly encouraged their academic progress.

In our mother’s words from the biography she wrote about him, Ted was tough, loyal, steadfast, trustworthy, talented, determined, loving and faith-filled.  We couldn’t agree more.

In lieu of flowers, donations may be made in Ted’s memory to Covenant House

Due to current gathering restrictions the funeral liturgy and interment was private.  Please click on the following link to view the Funeral Mass and Burial:

Share Your Memory of
Theodore
Upload Your Memory View All Memories
Be the first to upload a memory!
Share A Memory
Send Flowers