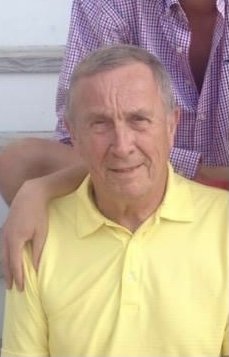 Richard was a devoted and cherished husband, father and grandfather.  He is survived by his three children, Richard F. Stockel Jr. from Mechanicsville, VA., his loving wife Linda and their beloved son Richard F. Stockel III; His daughter, Kristina Crawford from High Bridge NJ and her beloved children, Drew Jr. and Katharina; and his daughter, Colleen E. Stockel and her loving husband Glenn Kirsinger and their beloved children, Abigail, Sophia and Phoebe Anne.

Born in West New York, New Jersey on July 22, 1935, he was the son of the late Fridolin and Katharina Stockel.  Richard lived with his father, mother and older brother, Billy on 66th street.  The neighborhood was home to hard working parents, who wanted the best for their children.  Richard attended school for his primary and secondary education, in West New York, New Jersey.  Born to immigrant parents from Germany, Richard was known to roam the cliffs with his friends and get into a little mischief now and then.  Richard enjoyed music, playing his trumpet and heading into the city to jazz bars, eagerly listening to his favorite musicians/big bands.  Richard also played in a band where he often hit the high C note, of which he was very proud.  Richard was passionate about Basketball, played his entire life and started the Over Thirty Basketball League at St. Bernards Church.  He continued in this league up to the age of 60, although he continued non- competitive play with friends at his health club up until his late 70’s.  Richard developed great friendships growing up in West New York, most of whom were still dear friends up until his death.  As friends, they shared many wonderful life moments – high school and college graduations, marriages, children.  These friendships were especially important to Richard and he cherished them.  One of the most important and influential people in Richard’s life was his beloved, late wife, Ellen.  Richard loved and admired Ellen, a woman who followed him on his educational endeavors while sacrificing her own career for Richard’s passion and future career success.

Ellen was the true love of Richard’s life and they were blessed with 48 years of marriage. Their journey together included a marriage in 1959, three children and eventually 6 beautiful, cherished grandchildren.  Their marriage took them up and down the East coast in pursuit of higher education for Richard, multiple trips to countries around the world, where they both enjoyed seeing historic sites, learning about different cultures and just being together.  Ellen was a bit of a thrill seeker, where she convinced Richard to white water raft the Gauley River in West Virginia, take bi-plane rides in the Outer Banks and even hot air balloon rides to celebrate an anniversary.  They were true partners in all that life had to offer.  Richard most admired Ellen’s deep love, faith, honesty, her caring of others and the sacrifices she made for her family, especially those made in the early days of Richard’s continued education and career.  Richard respected Ellen’s intelligence and wisdom, her advice for him, his family and others, and the impact she had on those she loved.  Richard truly had a beautiful partnership in Ellen.

After high school, Richard was uncertain of his future.  His dear and loving friend, Bingo Newman, convinced him to come to Iowa with him. While at the University of Iowa, Richard found his true passion – Organic Chemistry – which changed Richard’s life.  Richard was proud to be the first to graduate from college in his family.  After graduating from Iowa, Richard pursued his higher education first by obtaining a M.S. of Chemistry at University of Vermont.  Richard then travelled south to Georgia Tech where he met his professor and mentor of Organic Chemistry.  Richard and Ellen would uproot once again, and follow his professor to Clemson University, where he proudly received the first Ph.D. of Chemistry from Clemson University.  In 2010, the University honored him with the prestigious Thomas Green Clemson Award for his major contributions in the field of organic chemistry, while his family, including his cousin Betty and her husband Bingo, who convinced Richard to try college, watched him accept the award with much love and admiration.  Academics became Richard’s passion, and for the rest of his life Richard has been researching and developing ideas, innovations and technology.  Richard has over 100 published patents, has had multiple publications, including contributions to over five books and has given talks on innovation and technology to many institutions.  Richard was passionate about technology and innovation and understood the importance of it to better our world, after all Richard himself was an inventor.  Richard was executive director for the Office of Promoting Technical Innovation (OPTI) which held many contests in coordination with other state programs, where the main goal was to promote young children’s interest in technology and innovation, with the hope that teaching invention would become part of the core curriculum of NJ schools.  As many of Richard’ children’s childhood friends can attest, Richard could quite often be found in the basement bent over his erlenmeyer flask, mixing, pouring and creating – his mind always active – innovating while awake and asleep.

Richard’s life was filled with unconditional love for his family.  Although Richard loved his three children, he adored all six grandchildren.  Richard’s grandchildren were the pride and joy of his life and he developed a beautiful, unique relationship with each grandchild, having a positive, loving and lasting impact on each of them.  All the grandchildren embody what Richard valued most, love, compassion and respect for others, hard work, a thirst for knowledge and continued education, and most importantly the value of family.  Our most cherished family time has always been down in the Outer Banks where he had vacationed with his family for over 20 years.  Everyone looked forward to one week out of the year where we could all be together, enjoying each other’s company, the ocean, sunsets and the comfort of unconditional love.

Richard’s life was filled with love, not only that of chemistry but love of family and friends.  Richard adored his nieces and nephews and was affectionately known as Uncle Ritchie.  When Uncle Ritchie and his brother Billy got together, the laughs never stopped and the love between them and their families was always witnessed.  As well, many of Richard’s children’s friends remember being warmly received by both Richard and Ellen at their home.  They both had an affinity for our friends and had sincere interest in their lives.  Many a childhood friend would come over to be comforted and given extra love when they needed it.  Even after each of Richard’s children left for college and began their own private lives, these friends would continue to visit Richard and Ellen, enjoying their company, advice and an ever welcoming home to them.

In the words of Richard’s eldest grandson Drew, and the sentiments of his other five beloved grandchildren, the three key lessons they observed on how he lived his life:  1) Never give up when the odds are stacked against you, 2) live modestly so you can help your family when they need it, and 3) have humility.

Richard’s love of life - his family, his passion for chemistry, research and development, enjoying one day at a time and observing all the beautiful things this world has to offer, have allowed him to live a beautiful, long, loving life, from which each of us has been touched forever.  Rest in Peace.

Friends may visit with the family on Friday, May 28, 2021 from 3-7PM at Kearns Funeral Home in Whitehouse Station, NJ.

We invite all family and friends after the funeral, to join us in celebrating Richard’s Beautiful Life at his home at 475 Rolling Hills Road, Bridgewater, NJ.

In lieu of flowers donations may be made through https://iamatiger.clemson.edu/giving for the benefit of Clemson University Foundation.