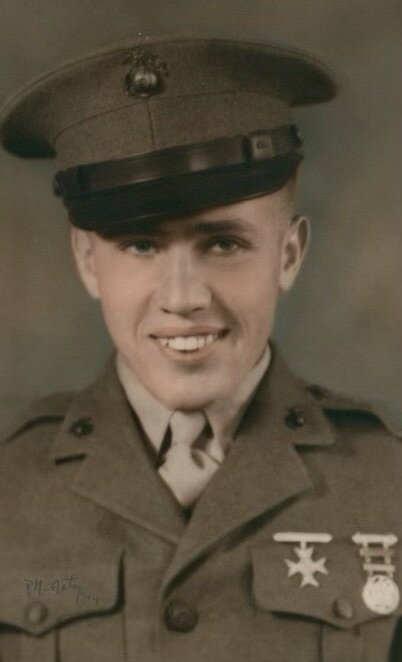 Please share a memory of Harry to include in a keepsake book for family and friends.
View Tribute Book

Born in Whitehouse, New Jersey, he was the son of the late Harry and Beatrice Van Fleet. Harry owned and operated All Seasons Heating and Cooling in Whitehouse until his retirement in 1985. After his retirement he lived in Culpeper, VA and St. Petersburg, Florida before moving to Lambertville in 2013.  For the last two years Harry was wonderfully cared for by the staff at the Hunterdon Care Center in Flemington, NJ.

Harry graduated Hunterdon High School and then joined the United States Marine Corps, serving in WWII. He was a former member of the Whitehouse United Methodist Church, an Eagle Scout and assisted as a Cub Scout Leader. He also, was a member of the Hunterdon Co. historical Society, spending many years compiling and completing the Van Fleet’s family genealogy. In his 70’s he became a licensed real-estate agent.

Harry appreciated the outdoors and enjoyed fishing and hunting. He built go karts, model trains and model planes. He also took flying lessons but did not have the time to acquire his pilot’s license.

Harry was a devoted Christian, husband and family man who always took care of his family and friends.

Harry was predeceased by his brothers, Richard and Kenneth Van Fleet and granddaughter, Janel Hodgson.

A graveside service with Military Honors will be held on Saturday, Sept. 4th at 11:00 AM at Rural Hill Cemetery, Old Highway 28, Whitehouse.

Look inside to read what others have shared
Family and friends are coming together online to create a special keepsake. Every memory left on the online obituary will be automatically included in this book.
View Tribute Book
Share Your Memory of
Harry
Upload Your Memory View All Memories
Be the first to upload a memory!
Share A Memory
Send Flowers
Plant a Tree