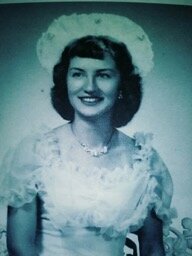 Please share a memory of Sophia to include in a keepsake book for family and friends.
View Tribute Book

The daughter of the late Stanislaus and Anna Kruk Kania, “Sophie” was born May 12, 1932, and grew up on a small farm on Pulaski Road just east of Our Lady of Lourdes Catholic Church where she was a lifelong parishioner.  Captain of the Flemington High School basketball team her junior and senior years, “Sure Shot Kania” was also an incredibly talented singer in the school choir.  As a young woman in the 1950s she was featured on a live TV talent show.

In August 1960, Sophie married “city slicker” and former World War II aviator, William (Bill) Dragan who ran the Village Store in town.  After selling the store, they settled down to raise a family of five children.  Bill became a CPA and Sophie a homemaker.  Around 1970, with her professionally trained beautiful, rich mezzo-soprano singing voice, she started the parish children’s choir and also directed her family choir for years. Some of the best gifts she gave to both her children and the parishioners were the Christmas Eve duets singing Cantique de Noel with Bill - this would put us all in tears for its beauty.

After her children were grown, Sophie continued to sing in the church and diocesan choirs. She prepared meals for the pastors, was a dedicated member of the Altar Rosary Society, and also lovingly tended the plants and flowers in the church. Recognizing her incredible talent and dedicated service to others, the parish presented her with the Outstanding Service in Music Ministry as a Cantor, Adult Choir Award in May 1991, Mother of the Year in May 1992, and Rosarian of Honor in Oct. 2014.  Sophie and Bill also cherished the Apostolic Blessing they received from Pope (now Saint) John Paul II for their 40th wedding anniversary in August 2000.

Also in the comunity, Sophie served as president of the Polish American Hall and was later recognized as an honorary life member.  For a time Sophie even brought her wonderful cooking skills, wisdom, smile, and pragmatic ways to the students of Hunterdon Central High School where she worked in the cafeteria and her homemade soups became a hit with the teachers.

Friends may visit with the family on Sunday, January 2 from 2-5 p.m. at the Kearns Funeral Home, 103 Old Highway 28, Whitehouse.  A funeral liturgy will be held on January 3 at 9:30 a.m. at Our Lady of Lourdes Church, Whitehouse Station. Burial will be at 1 p.m. at the Brigadier General William C. Doyle Veterans Memorial Cemetery, Wrightstown.

Look inside to read what others have shared
Family and friends are coming together online to create a special keepsake. Every memory left on the online obituary will be automatically included in this book.
View Tribute Book
Share Your Memory of
Sophia
Upload Your Memory View All Memories
Be the first to upload a memory!
Share A Memory
Send Flowers
Plant a Tree