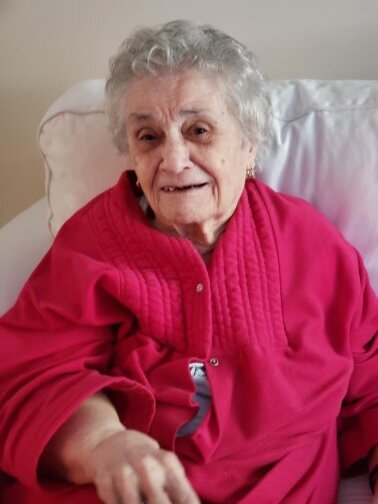 Born in Irvington, she was the daughter of the late Joseph and Josephine Dispenziere.

Anna had been a longtime resident of Colonia before moving to Whitehouse Station 27 years ago.

She was a member of Our Lady of Lourdes Church in Whitehouse Station where she also belonged to the Rosary Altar Society and was a member of the Readington Seniors where she had served as past president.  Some of Anna’s most enjoyable pastimes were taking trips to Atlantic City, going on cruises and seeing Broadway shows.

She was predeceased by her beloved husband, Anthony in 1985.

She is survived by her sons, Robert and his wife, Rose Marie and Gary and his partner, Jeffrey Bateman; by her daughter, Kathy Krill and her husband, Richard; her  grandsons, Robert, Patrick, Thomas and Joseph Guarino and Richard, Anthony, and Kevin Krill as well as her only granddaughter, Kristina Krill Schreiner.  Anna is also survived by 7 great grandchildren.

She is predeceased by her sister Beatrice Santora.

Also surviving are her sister Grace Padilla, her brother, Dr. Joseph Dispenziere and his wife, Annette; her brother-in-law Dr. Lawrence Guarino, her  Sister-in-law Rose Guarino as well as many nieces and nephews.

A funeral liturgy will be held on Thursday, March 17, 2022 at 9:30 AM at Our Lady of Lourdes Church in Whitehouse Station.

A committal service will be at 11:30 AM in St. Gertrude Cemetery 53 Inman Avenue, Colonia NJ.

In lieu of flowers donations may be made through IN MEMORY OF at www.inmemof.org/anna-d-guarino for the benefit of the Dementia Society or the Alzheimer's Association.

Funeral arrangements have been entrusted to the Kearns Funeral Home in Whitehouse.  www.kearnsfuneralhome.com