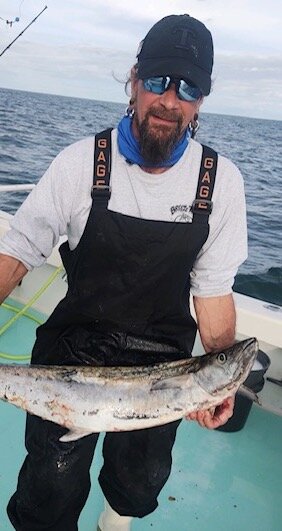 Please share a memory of Scott to include in a keepsake book for family and friends.
View Tribute Book

Scott Joseph Stadnik, age 48 of Stanton, New Jersey, died Thursday, June 23, 2022 at Robert Wood Johnson Hospital in Rahway, New Jersey, from injuries sustained in a motor vehicle accident. Born in Flemington, New Jersey he was the son of Kenneth Stadnik and Sharon Mazet. Scott grew up in Whitehouse, NJ and resided in Stanton.

He graduated from Valley Forge Military Academy in 1991, where he sang in the elite choir and played football. He was on the undefeated team 1989-90. He also attended University of Tennessee and was a big Tennessee Vols fan. He enjoyed working in construction outdoors with a specialty in water lines, and was a member of Local 472 labor union.

His free time was spent fishing - especially on the Outer Banks of NC,  hunting, and helping people.  His biggest joy was his son Damian, he loved spending time together fishing as well as watching his athletic games. He was a huge animal lover and loved to cook, and preparing food for picnics.

Scott is survived by his son Damian, his parents Kenneth and Sharon, his loving sister Juanita, stepfather Anthony Mazet, stepsisters Karen, Christine, and Cindy Coletti, CC Jablonski, Kathleen Schmitt, and step brothers Thomas and Anthony Mazet, and many aunts, uncles and cousins. He was predeceased by his stepmother Barbara Stadnik and his stepbrother Peter Coletti.

Friends may visit with the family on Wednesday, June 29, 4pm-8:00pm, immediately followed by a funeral service at the Kearns Funeral Home located at 103 Old Highway 28, Whitehouse Station, NJ, 08889.

In lieu of flowers, donations in Scott’s name may be made online to Nature Conservancy,  www.nature.org/en-us, or Trout Unlimited, PO Box 671, Sparta, NJ 07871.

A gathering to celebrate Scott’s life will be announced at a later date.

Look inside to read what others have shared
Family and friends are coming together online to create a special keepsake. Every memory left on the online obituary will be automatically included in this book.
View Tribute Book
Share Your Memory of
Scott
Upload Your Memory View All Memories
Be the first to upload a memory!
Share A Memory
Send Flowers
Plant a Tree