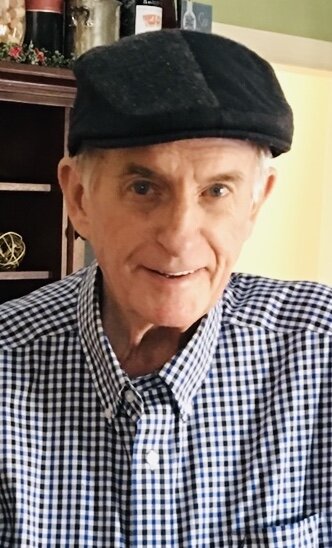 Please share a memory of Austin to include in a keepsake book for family and friends.
View Tribute Book

Born October 14, 1938 in Hartford CT. He was the son of Burton Herzog and Marion Cook.

Austin married his wife, Lorraine Hans in 1966, when they both worked in NYC in finance. Prior to moving to Whitehouse Station, NJ in 1971 where they raised their family, Austin and Lorraine lived in Queens, NY and Sayreville, NJ. Austin moved to Milford, NJ in 2020.

Austin holds graduate degrees from Drew University and Rensselaer Polytechnic Institute in Theology and Finance. He worked for over 26 years in the World Trade Center in NYC as an Actuary for Ebasco Risk Management. He enjoyed his daily commute from Whitehouse Station to NYC on the train where he would study and write. He survived the 1993 terrorist attack on the WTC, where he had to walk down over 90 flights of stairs to safety. After his company moved, he worked in actuarial consulting positions for Buck Consultants and Mellon Bank, retiring in 2013.

Austin had a true love of theology and was active with several churches where he taught adult bible classes. He authored several books including Abba and Parables for the Way in 2003, as well as finance publications on PERS, the public employee retirement system. He studied and taught the “Enneagram” which he was truly passionate about. He had a fascination with collecting books and antiques and was an avid golfer. He was a caddy for several years at a country club in West Orange, where he learned the sport intimately. He had a love for gardening and nature, especially birds. He enjoyed watching the NY Mets baseball team and NY Giants football team play, which led to him owning a hobby and sports retail store. Austin was active in his community by volunteering with food pantries, helping to rehabilitate the Whitehouse Station/Readington Library in the 80’s, as well as supporting many local charities.

In lieu of flowers, the family has requested contributions in Austin’s name be made to the Whitehouse Rescue Squad, P.O. Box 175, Whitehouse Station, NJ 08889.

Friends may visit with the family Thursday, September 8, 2022 from 10:00 to 11:00 AM at the Kearns Funeral Home, 103 Old Highway 28, Whitehouse, NJ.  A funeral service, officiated by Pastor Dianna Stone of the the Whitehouse United Methodist Church, will immediately follow the visitation at 11:00.  Burial following the service will be held in Rural Hill Cemetery.

Look inside to read what others have shared
Family and friends are coming together online to create a special keepsake. Every memory left on the online obituary will be automatically included in this book.
View Tribute Book
Share Your Memory of
Austin
Upload Your Memory View All Memories
Be the first to upload a memory!
Share A Memory
Send Flowers
Plant a Tree