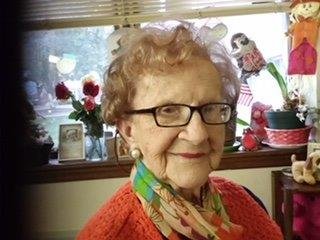 Mary Anna Chezmar, age 99 of Pittstown, NJ., entered into eternal rest on Sunday, January 20, 2019 at the Country Arch Care Center in Pittstown, NJ. Born and raised in Edision she lived in Carteret until moving to Belvidere in 2001 and later to Pittstown  N.J. in 2014.

She was the daughter of the late George and Anna Onder.  She was predeceased by her daughter Nancy, her husband of 65 years John, her sister Anna Lucas, her brother, John (Chinook) Onder and sister, Elizabeth Chezmar.

She attended Clara Barton school in Edison where she became an accomplished intramural basketball player.

She worked for the Metro Glass Corp in Carteret until her retirement in 1977 as a quality control inspector.  She also worked as a seamstress for the Komar Corporation,sewing silk parachutes for the paratroopers during World War II.  Her hands were never idle.  She was an accomplished Baker, Crafter, Seamstress and Mother.

She is survived by her daughters, Carol Wissing of Spring Hill Florida and Patricia and Son-in Law, Patrick Dziubek of Pittstown, grandsons, Frederick J  and Daniel J Wissing and 4 great grandchildren.

There will be no viewing hours.

In lieu of flowers the family has requested memorial donations in her memory to St. Catherine of Siena Building Fund, PO Box 245, Pittstown, NJ 08867.

Funeral arrangements have been entrusted to the Kearns Funeral Home, Ltd., Whitehouse. Visit www.kearnsfuneralhome.com for more information or to send condolences to the family.